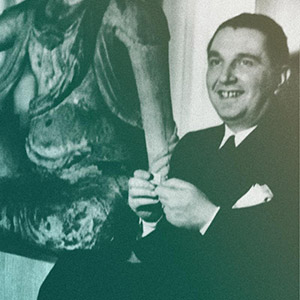 A descendant of an eminent Ticino-based family of artists, he opened his own glass making shop in 1921 after working as an apprentice at the Giannotti glassworks. In the early 1920s, he took part in the Venice Biennale, the Monza Biennale, the Exposition des Arts Décoratifs in Paris and exhibitions in Cologne and Barcelona. His work combines extreme modernity with outstanding technical ability.His creations include the glass windows of the Trieste Stock Exchange, the windows of the Motorship Victoria as well as those of the transatlantic liner Conte di Savoia.In 1932, Pietro Chiesa was asked by Gio Ponti to share in the artistic direction of the newborn FontanaArte, a role that would enable him to give full expression to his creative flair by designing over a thousand different objects (furniture, tables, lamps, glass windows, objets d’art etc). Some of these pieces took their place in the history of design and are still produced by FontanaArte today, such as the Fontana curved table (1932), the Cartoccio vase (1932) and the Luminator floor lamp (1933).