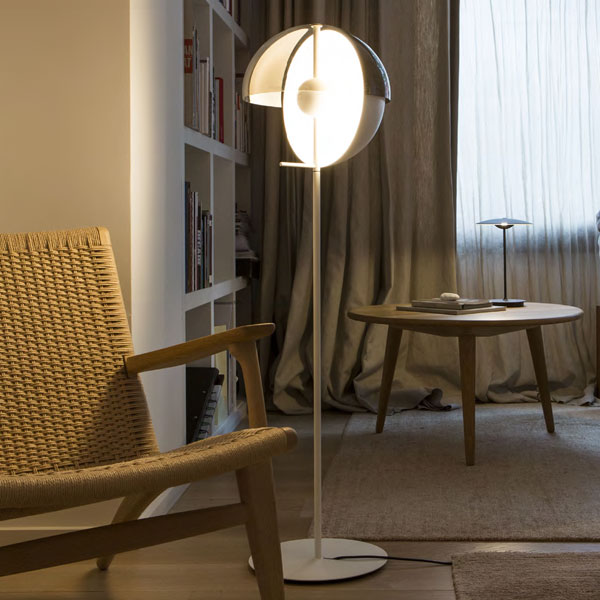 From light to shadow with a single gesture. The Greek goddess Theia – mother of the sun, the moon and the dawn – lends her name to this lamp, whose design seeks to express the beauty of light and the fascination we feel for it. In Theia, the materials and shapes are merely the physical manifestations of the underlying concept: merging both light and shadow in a single piece. Theia has two faces: to discover them, simply swivel the fixture around its central axis. It can be pointed towards you for use as a reading lamp, or towards an object or a wall, creating a subtle, indirect light that immediately warms the atmosphere. Because Theia’s metal lampshade is totally opaque, this swivelling movement totally shifts the perception of the piece. Theia’s formal design is elementary and streamlined: two half-spheres, one placed horizontally and the other vertically, which intersect with each other. Just as in nature itself, these formal elements make it possible for the light from a source to be simultaneously projected, reflected, and absorbed by objects for our visual enjoyment. 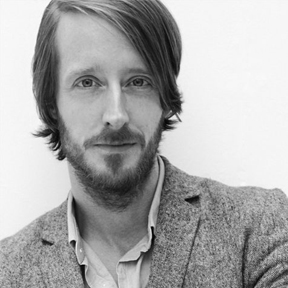 London based Mathias Hahn was born 1977 in Germany, and graduated from Essen University, Germany, in 2004. Two years later he received a MA degree from the Design Products course at the Royal College of Art under Ron Arad. During his studies in Germany he gained experience in the Product Design department of Volkswagen in Wolfsburg. Since his move to London he worked as a freelance designer for Tom Dixon and in 2006 became one of the founding members of OKAYstudio. From there he is working on diverse projects in the field of industrial for clients like Marset, Ligne Roset, Kvadrat, Kohler, Magazin and ddeutsche Zeitung Magazin. As part of YDMI, organized by the German Design Council, Mathias became Young Professional 2008, and received the 2010 German Design Price as Newcomer/Finalist. Through his background in Industrial Design, working according to production and manufacturing processes, Mathias has a natural desire for designing towards use and functionality. He pictures his work as having two sides. One is based on the idea to create objects that have a place in everyday life and solve a particular problem, the other one is more playful and related to the narrative side of the design process which often functions as a starting point. Depending on the project these two aspects come together and form useful commodities that show a slight layer of humor, social context or even naivety.

Save Theia Floor Lamp to a project

+Create New
Other Products from Theia