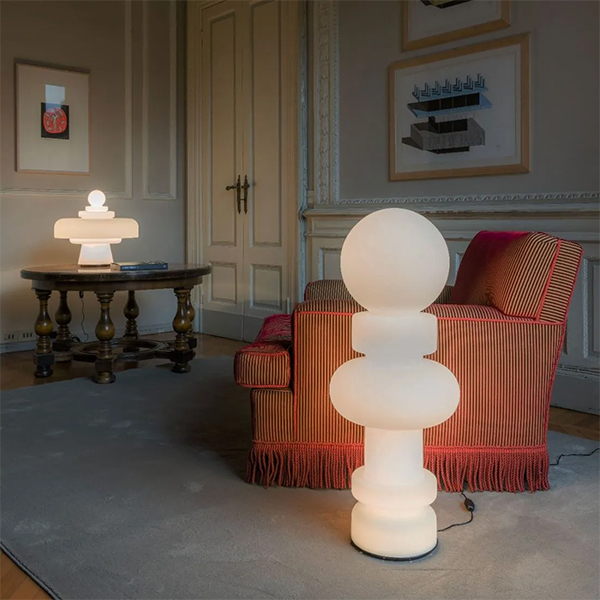 Inspired by the game of chess with their sinuous shapes, Re and Regina are the key characters of the chessboard. Their profiles stand out clearly in the white light diffused by opalescent glass. Real individuals, they play in pairs alternating spheres, cylinders and rings of light. Vertical the King (Re), horizontal the Queen (Regina). They can be placed next to each other or in different spots in the same room, be used as floor or table lamps, on a coffee table or a desk, both Re and Regina have the presence to create a context. The dimmer allows to modulate the light making it a surreal element with different degrees of intensity: an element of representation that releases energy in space when the light is bright, abstract and restful when the light is soft and low. Glass sculptures during the day in environments illuminated by natural light. Re and Regina are inspired by the history of art, from Cosmè Tura to the Flemish interiors of Jan Van Eych to the conceptual imagery of Marcel Duchamp who plays chess as a lifestyle. Re and Regina are Cartesian axes of a universe that crosses ages and cultures. In 2020 FontanaArte reintroduces these glass lamps as a sign of the expressive wealth contained in the great repertory of ideas that is the FontanaArte catalogue and, most importantly an homage to the talent of an artist who had a gift for calibrating the formal tension of a utilitarian object on a quest for unity among the arts.

Bobo Piccoli was born in 1927 into a family of Milanese intellectuals. The Piccoli house was frequented by Mario Sironi, Carlo Carrà, Giuseppe Ungaretti, Salvatore Quasimodo and many other artists. Piccoli studied the classics, he learned and assimilated Greek art, as well as sculpture and architecture, iconography and mosaics. He loved Giotto and the Renaissance, Caravaggio and Savinio, he was always interested in light in art and in architecture, in cinema and theatre. He loved to read Bertold Brecht, Samuel Beckett and Jean Paul Sartre, surrealists such as Antonin Artaud and André Breton, and Fiabe Italiane by Italo Calvino. While painting was his main medium, Bobo Piccoli constantly sought a syntesis among the arts, leading to many of his projects with architects including Roberto Menghi, Alberto Scarzella, Marco Zanuso, Leonardo Fiori, Ezio Sgrelli.His contributions to iconic works of architecture such as Petrolchimico di Brindisi (1959), Ian Battistoni, il Palazzo delle Stelline in Corso Magenta a Milano (1972), il Centro Civico di Pieve Emanuele, (1980), la piazza del Comune di Cislago (1981), are exemplary. In 1968 he began working for FontanaArte in a contemplation of the relationship between art and serial products. Piccoli created a number of lighting elements for FontanaArte, including the Re and Regina lamps (1968), Modulo (1969), Clessidra (1970) and the mirror Reame (1968).

Add RE Floor Lamp to a project