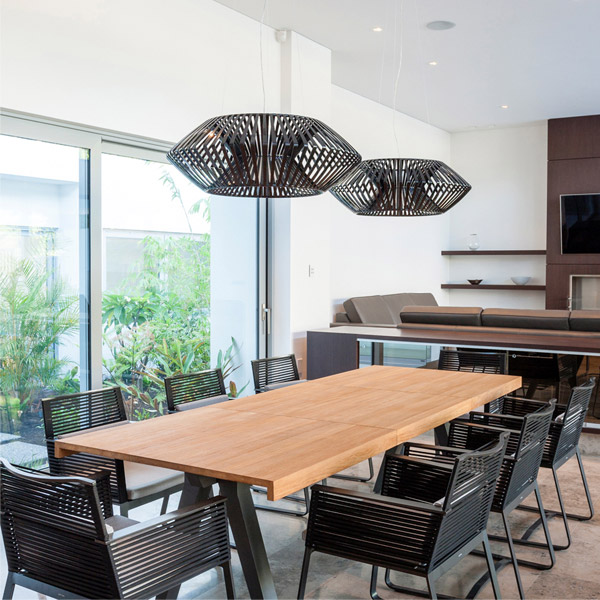 This lamp was designed by Héctor Serrano. A spatial shape, yet near and tangible, that thrills and inspires a sense of identity through the extraordinary and fantastic. With the help of the plastic injection technology we developed a lighting collection which, through its ribs combined with the geometrical form, immerses us in a world of dreams.

Hector was born in Valencia (Spain) in 1974. He studied Industrial Design at CEU University before moving to London to study a master’s degree in Product Design at The Royal College of Art. He founded his design office in London in 2000. His projects combine innovation with the communication of familiar ideas in unusual and inventive way. The client list includes companies such as Muji, FontanaArte, “la Caixa”, Telefónica Foundation, Roca, Gandia Blasco, ICEX (Spanish Ministry of Industry, Tourism and Trade), Droog Design, Metalarte, Lékué, Lexon, Coachella Art and Music Festival and La Casa Encendida (Caja Madrid) among others. The office has received different awards such as the Red Dot Design Award, Designer of the Year 2009 by AD magazine, Best of the Year Awards by Interior Design Magazine, the Peugeot Design Award and the second prize on the New Bus for London competition with Miñarro García and Javier Esteban. His products have been exhibited extensively in Museums such as V&A in London and Cooper-Hewit National Design Museum in New York and are part of different collections as the Central Museum of Amsterdam. Hector founded in 2010 Borealis, the company responsible for its exhibition projects and installations. He combines his professional activity giving classes and lectures at universities as ECAL in Lausanne, RCA London, CEU in Valencia and IE in Madrid.

+Create New
Other Products from V