A luminous object in stainless steel with unique appeal. The upper part of the body rotates to allow complete management of the intensity of the light. Loop can be put on a table or on the floor. 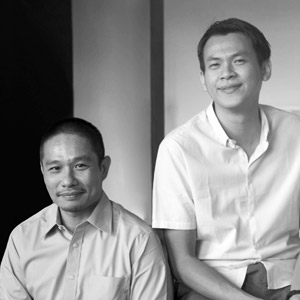 Voon Wong (Singapore, 1963) and Benson Saw (Malaysia, 1974) met while following two apparently quite different paths. Voon graduated in Architecture in 1995 in Singapore and then School of Architecture, London. He then worked with prestigious architecture studios, such as Zaha Hadid Architects. Meanwhile, Benson graduated in Mechanical Engineering at Boston University in 1999.They started work together in September 2001, during the Designers Block London exhibition, where they showcased a series of their works. This led to the birth of VWBS, a multi-discipline design studio based in London, working not only in architecture and interior design, but also in industrial design. Thanks to their different backgrounds, Voon and Benson tackle each job from a different perspective, ensuring broad project vision. A significant example in this sense is the Loop lamp, designed by Voon and Benson for FontanaArte in 2003 and selected that same year for the Compasso d'Oro award.

+Create New
Other Products from Loop