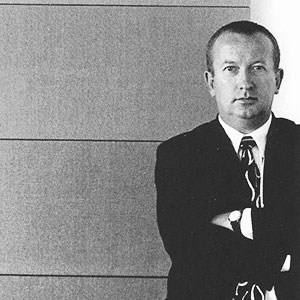 Belgian architect Jan Van Lierde heads up his eponymous JVL Studio in Antwerp, where he and his team design architectural projects, and lighting and product designs. Lierde received his architectural degree from the Municipal Higher Institute for Architecture and Urban Planning in Ghent in 1978, and has spent the next 25 years designing more than 100 buildings in Belgium, as well as numerous lighting projects for some of the world’s top manufacturers, including Basque Country heavyweight Grupo B.lux. His Pinot and Globe pendants are among the B.lux lighting fixtures Global Lighting brings to the North American marketplace. His portfolio includes public and private works of art, some of the private installations, which he sees as springing from a very solitary imaginative process free to the influence of others, are in collaborations with avant-garde entities like Smogallery in Beirut. His architecture portfolio and the cultural interests he lists as his likes on his website shows he is well-rounded and he sees life with an artist’s heart. Highlighting galleries from London and New York to Edinburgh and Sydney, and refined design entities and happenings in France and Italy, his focus is global and it shows in his work. His connection with his home country of Belgium is, of course, top of mind with nods to cultural interests like musician Wim Mertens; but his interests cut across many international lines, as is expressed in his fascination with such international art stars as Raf Simons. We at Global Lighting point these out because this breadth of cultural sophistications comes through in the depth of a designer’s work. Lucky for young designers, he offers six-month internship programs to undergraduate and graduate students who are eager to launch themselves into the world of design.