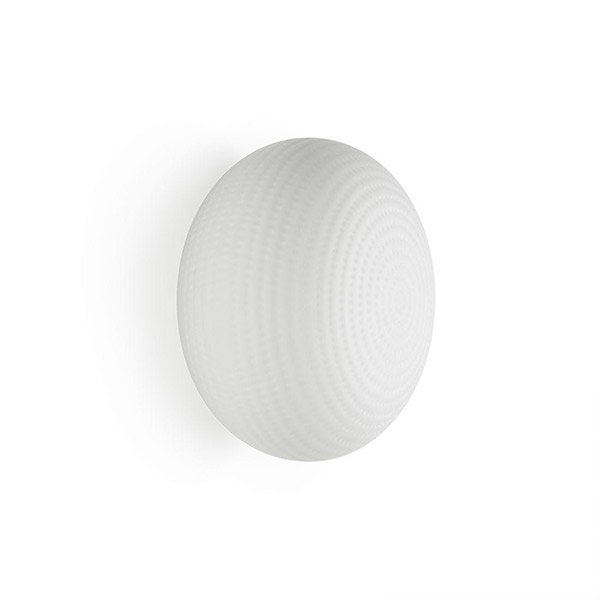 Bianca is a family of luminaires equipped with a fixed-mould blown cased glass diffuser with a milky white satin finish. The decoration on the diffuser surface features an orderly series of shallow delicate grooves etched into the white glass, yielding an effect resembling small footprints on fresh snow. Mouth blown, belt sanded and dipped in acid to obtain the distinctive 'silk effect' typical of fine glassware, Bianca diffusers are available in three different diameters to complete all thirteen types of luminaires belonging to the family. The largest diffuser has a 50 cm diameter and, owing to its dimensions and the amount of glass involved, continues to pose a considerable challenge even for the ablest of glassblowers trained in the fixed-mould blowing technique, which – according to the traditional Venetian production process – is performed without any external aids for turning and shaping the glass blob inside the mould, but relies solely on the glassblower's skill and lung capacity. Bianca is available in the following versions: table-top without stem, floor-standing with base and stem, pendant, wall-mounted and ceiling-mounted. The matt white coating applied to the various metal supports evokes the name and colour of the diffuser. The Small- and Medium-sized versions (with 16 cm and 30 cm diameter respectively) mount a dimmable Led board, while the Large-sized version ( 50 cm diameter) features an E27 lamp holder capable of housing various types of light sources. Bianca produces a very warm, diffuse and enveloping light emission in the surrounding environment. 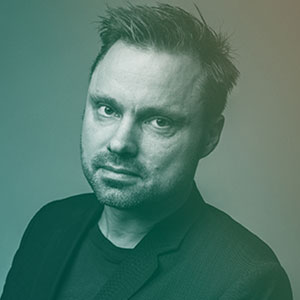 Since graduation from Konstfack, Stockholm in 1999 Klenell has worked with design commissions for various manufacturers in Europe and Asia. Clients include Iittala, NakNak, Källemo, Moooi, Bals Tokyo, Muuto and Örsjö to name a few. Simultaneously he has developed his own and unique language as a glass artist with several solo exhibitions and public art commissions. These two tracks of his profession often influence and interact with each other. The broad variety of projects with a mix of art, craft and design is also what characterizes his work. This process has created a personal, innovative, and new take on the Scandinavian design tradition. ”In a way I think you could describe my working method as quite old school. It has a resemblance to the early years of industrialism, before the term ‘industrial designer’ was invented. Then artists were hired by the industry to create everyday objects. I know it is a very romantic image of my practice but at the same time it’s quite true. I aim to combine artistic skills with a knowledge of industrial production as well as the demands of contemporary architecture.The art projects I develop could be described as a personal laboratory where I explore materials, production techniques and human behaviors without any restrictions than my own. Naturally such experiences later enrich the commissions I do for my clients.” This process has resulted in numerous awards such as the Excellent Swedish Design diploma, the +1 award and the German Red-dot design award. In 2003 he was awarded the Ljunggren Design Prize. The work of Matti Klenell is also found in several museum collections in Sweden and abroad.